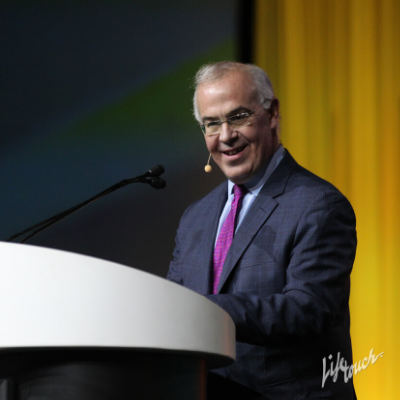 Walking out onto stage Thursday night for his keynote speech at the 1st General Session of the AASA national conference in San Diego, it was easy to see David Brooks, the acclaimed New York Times op-ed columnist, book author and public television pundit. There he was on stage, the recognizable clean-cut man with thinning, gray hair and wireless glasses, his visage magnified and multiplied on multiple massive screens in the convention center.

Forty-five minutes later, it was not possible to see Brooks the same way.

And that was his point.

Following threads from his latest book, “The Road to Character,” the 58-year-old Brooks described discovering early in life what he wanted to do: He would be a writer. And it would prove a marvelous career, spurred early on by the mentorship and support of William F. Buckley, Jr., the famed conservative commentator and public intellectual.

But with success came an increasing sense of isolation and disenchantment. “Self-interest, thinking that you are what you achieve, only takes you so far,” Brooks told a rapt audience. He felt alone – and in that, he was not.

Americans, he said, live in a time of great promise and peril. In some ways, life has never been better, and in others never worse. Most Americans live transactional existences, never really connecting with others beyond the needs of the moment. Patients get, on average, 16 seconds to talk with their doctors before diagnoses are given. Less than 10 percent of people say they have meaningful conversations with their neighbors. Loneliness is epidemic, and with it the concurrent woes of rising suicide rates, rampant drug addiction and chronic depression.

We don’t “see” people and they don’t “see” us, Brooks said. It is a crisis of our individual and collective souls.

“Whatever you believe, I believe each of us has a soul, a piece without size, shape or weight that is of infinite value,” he said. “It is equal in all of us, whatever our status, rich or poor. It is our soul that seeks a life of purpose and meaning.”

For the assembled school leaders, Brooks’ message was clear: They are the custodians and caretakers of young souls. It is their mission and joy to grow and nurture both young hearts and minds, to instill within students the first glimmers of their meaning in life, to not merely treat them as “brains on a stick.”

That means creating and teaching the art of relationships, the essential and fundamental need of every human being. “The first thing a newborn needs isn’t food or safety,” Brooks said. “It is to establish a connection with its mother. Everything else comes after that.”

It was heartfelt. It was told through a dozen anecdotes and sometimes deeply revealing stories of Brooks’ own struggles and search for meaning. He hoped in doing so, he would be seen. And heard.