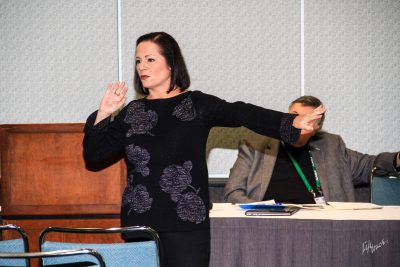 In an age where social media has amplified every voice, fake news is a newfound phenomenon that often drowns out the facts and can bring chaos to a community.

The session stressed the importance of transparency and ongoing communication with the community in gaining the public’s trust.

“The best antidote to fake news is to proactively communicate,” Rogers said. “Tell your story in multiple ways every day and not just the good news. You have to be upfront with your bad news too. That’s how you build trust.”

Platforms such as electronic newsletters, mobile apps, websites and social media are essential in providing the latest news updates in a school system. That’s the approach taken by the Highline Public Schools, whose strategy is known as COPE: create once, publish everywhere.

The panelists said a school district with adequate staff resources should try to cater a message’s tone with the specific audience of a platform for maximum effectiveness. For example, a playful tone can be used to appeal to the primarily younger people who use Instagram.

Rumors that promote false information also should be addressed in a timely manner before they spiral out of control and take over as the “single narrative,” according to Enfield.

The veteran superintendent shared her experiences dealing with fake news in the Highline schools. One involved an incident where the district needed to pass a bond proposal to fix and replace buildings in dire need of repair.

“Those things are funny, and we can laugh about them [and] we do need to keep a sense of humor about this,” Enfield said. “But over time, they can spin into something much more nefarious and damaging if you just let it go completely unchecked.”

Despite district efforts to share information about the facility funding, inaccurate rumors — including claims that the bond would fund a hot tub in Enfield’s office and that an elementary school was being torn down for Enfield to build her dream home — impeded progress on the proposal. The bond failed with 59 percent voting favoring it, just below the 60 percent supermajority needed to pass the bond.

Once the school district brought together community leaders to analyze the data and develop a new bond proposal, the second try passed with a 67 percent majority.

The Highline Public Schools was able to defuse another controversial situation – involving offensive comments by students painted on school property – that was intensified through social media. The district responded by communicating directly with community members.

“Sometimes you just have to talk to people,” Rogers said. “It’s really important that people see the superintendent as a human being because if you’re always behind a screen, people forget.”

Besides controlling fake news online, Enfield also suggests providing facts to community leaders and enlisting them in the fight against the spread of inaccurate information.

(Cindy Liu is a senior at Diamond Bar High School in Diamond Bar, Calif., and is an intern with AASA’s Conference Daily Online.)