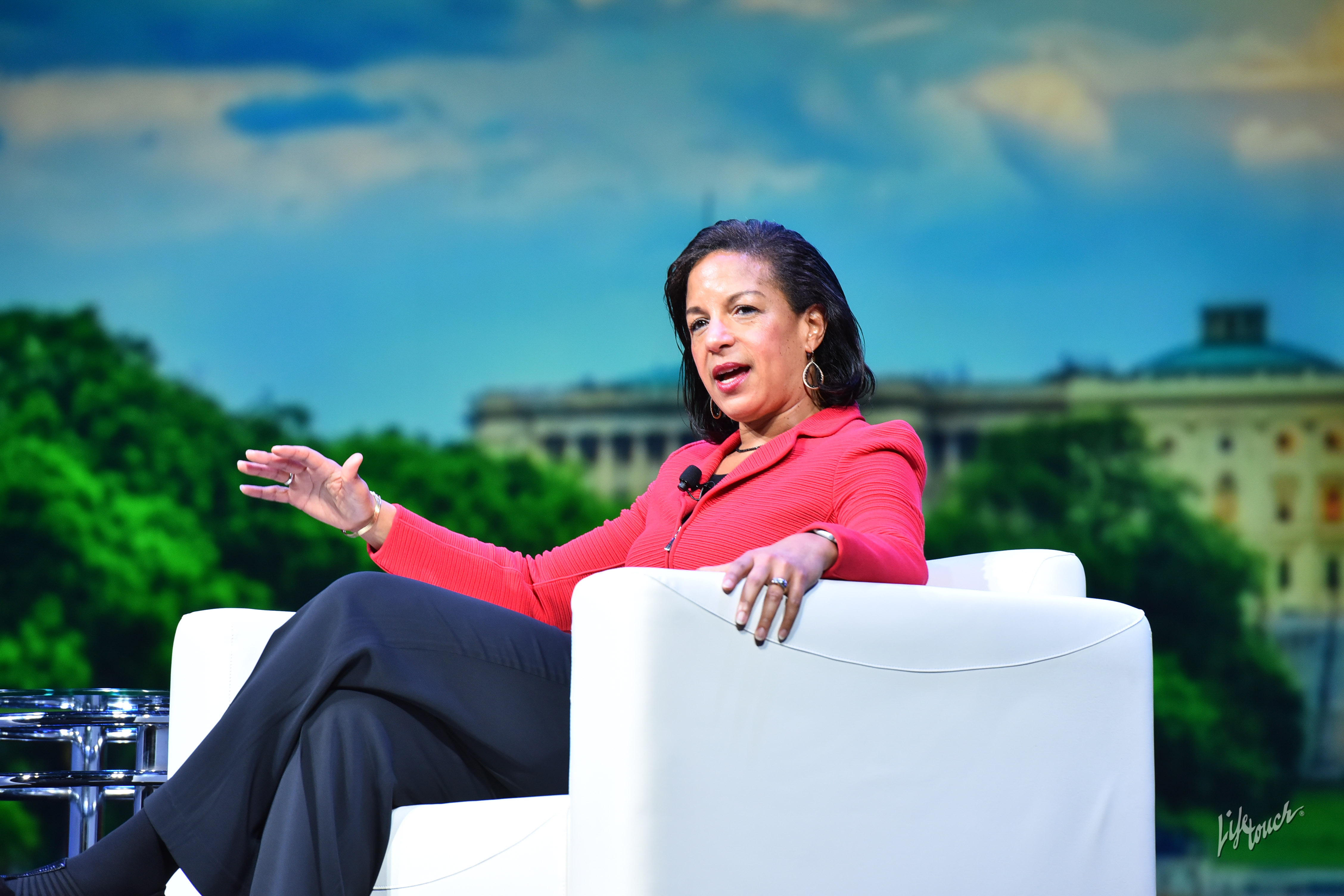 Former National Security Adviser Susan Rice is looking to superintendents and teachers to stop what she fears may be a weakening of American democracy.

She turned directly toward the crowd at the Los Angeles Convention Center when she said: “I think it’s important that our students are educated in civics, that they are taught the difference between good and bad information.” That statement promoted audience heads nodding in agreement. “If they can’t do that, they cannot support our democracy.”

As she answered questions posed by AASA Executive Director Daniel A. Domenech, Rice shared her thoughts about racism and gender bias, details about her family history and her lingering worries about the security of the United States, as well as tips for managing staff in an organization.

Rice served as national security adviser to President Barrack Obama from 2013-17. She was the U.S. ambassador to the United Nations from 2009 until 2013 and served as U.S. assistant secretary of state for African affairs from 1997-2001, overseeing foreign policy matters with 48 sub-Saharan African countries and 5,000 U.S. and foreign service employees.

When Domenech asked Rice about her experiences with racism and sexism, Rice explained that her father, Emmett Rice, who has a long story of overcoming adversity, sharpened her perspective. Born in South Carolina, he earned a Ph.D. in economics from the University of California at Berkeley and became a professor. His beliefs on how to respond to prejudice enabled her to rise and succeed, she said.

“As real as racial prejudice or sexism was, it wasn’t an excuse,” Rice said, recalling how tough her father was because he served in WWII with the Tuskegee Airmen — the nation’s first African-American fighter pilots who overcame substantial segregation to go to combat. “If they don’t like who you are because of what you look like or because of your gender or sexual orientation, then you’ve got to let that be their problem.”

Her parents had a strong work ethic. Both rose from poverty to go to college. Her mother Lois Rice was the child of Jamaican immigrants who attended Radcliffe College and later helped create the Pell Grant program that now assists many needy students with paying for college.

“It was instilled in me that I had to do my best,” Rice said.

As Rice rose through the ranks of the U.S. State Department, she began to oversee more and more employees and become involved at higher and higher levels of diplomacy and policymaking. When asked what she had learned about leadership, Rice replied that it’s important to recognize staff members as people who have important issues at home, not just at work and to trust them to do their jobs.

“You have to take time and put family first, and others will fill in. That helps people be even more committed to doing what they do,” she said. “You have to trust them and let them go, and that’s when they’ll do their best.”

As national security adviser, Rice had exclusive access to top security information. Although she left her post in 2017, Rice still thinks about the looming threats to the nation’s security: North Korea’s increasing nuclearization, Russia’s attempts to weaken American unity by polarizing the country through information disruption and election meddling, China’s rise as a world power.

One of her greatest fears, she said, “are our domestic political divisions.”

“If we can’t figure out that there is more than unites us than divides us — if we don’t do that, then we are going to make it far easier for our adversaries to speed our decline,” Rice said.

She made one last request of the educators in the audience and the important role they have in teaching young citizens.

“You will be extraordinarily important on whether we will have young minds who will have the skills to compete in the 21st Century,” Rice said. “Teacher our kids that they don’t live on an island between the Pacific and Atlantic oceans but they are part of a larger world.”

(Emily Gersema is associate director of communications at USC and a reporter with AASA’s Conference Daily Online.)