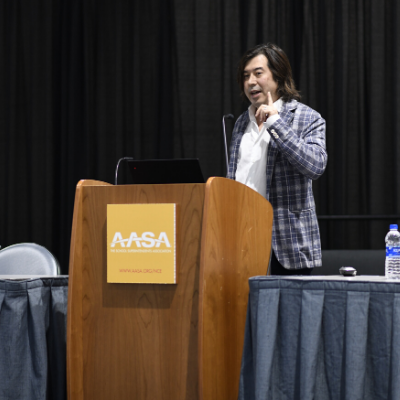 Generally speaking, school leaders know where they want to go, their school district’s goals and aspirations. The challenging is getting there.

“We all pretty much have the same mission statements,” said Ted Fujimoto, entrepreneur and co-founder of the New Tech Network, a national consortium of 113 school districts advocating technology-centric innovations to educate students and produce a 21st century workforce.

“It’s the execution that’s the difference. How do you get things done?”

In a Friday Thought Leader session at the AASA national conference, Fujimoto laid out five “pivot points” that he said are essential to translating good ideas into actionable results, whether in public education or private enterprise. (Fujimoto is also president of Landmark Consulting Group, which advises companies, foundations, trade groups and investors on growth and development.)

No. 1: Create “calibration experiences,” not inspections.

In the era of accountability, Fujimoto said it’s easy to focus on results alone, to hold people and programs responsible only for the bottom line without regard to how they got there or why they failed. An inspection first-and-only approach is not sustainable or healthy, he said. Rather, school leaders need to create moments that inspire intrinsic motivation in teachers and staff, an internalized sense of mission that can endure because people believe in it themselves.

No. 2: Do what is right, not comfortable.

“Get a bunch of people in a room to figure out a problem and by default, they’ll come to a consensus. That’s not a good thing,” said Fujimoto. “Usually, there’s nothing comfortable about innovation. By its nature, it’s disruptive. Progress and innovation require leadership willing to make hard decisions.”

No. 3: Create and maintain your freshwater tank.

This is a metaphor, said Fujimoto, for making sure that all systems within a school district are working synchronistically and synergistically, that the water is fresh across the tank. For example, an effort to promote project-based learning cannot succeed if the district is also committed to a pacing guide.

“Figure out what things are helpful, neutral and harmful, then get rid of the stuff that’s getting in the way,” he said.

No. 4: Use technology to empower humans.

Education is traditionally slow to employ new technologies to their greatest effect, said Fujimoto. And the greatest power of technology is in how it supports humans doing human work. “The most important role of technology is to support teams of people getting better at what they do,” he said. That could be as simple as real-time communications technologies that allow dispersed team members to communicate quickly and efficiently.

No. 5: Set the right pace for change.

Fujimoto employs a plane taking off as an analogy. If the plane isn’t moving fast enough down the runway, it won’t achieve lift off. His formula for success: No initiative for innovative change should take more than a year to effect, and ideally change should happen in three to six months.

Fujimoto’s final bit of advice involves setting aside “sacred time and space.” Great ideas aren’t conceived in a moment sitting at a desk or table. They are created and crafted over time in often unusual places — during walks, while taking a shower or in casual but controlled conversation.

He said it’s important to preserve time and find places for school leaders to talk, trade ideas and work through multiple iterations leading to a great idea.

Then they need to just go do it.