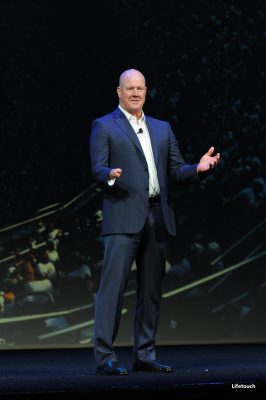 Baseball legend Jim Abbott recalled that the most poignant moments for him in his career occurred off the field, after the game was over. He would be in the clubhouse locker room, getting ready to go home when he would feel a tap on his shoulder. A clubhouse official would tell him: “There is a family outside waiting to talk to you.”

“I didn’t always want to go but when I got down there, I would see the moms and dads, and they had all these questions. They asked me what had my parents told me?” Abbott recalled.

And maybe he would play a short game of catch with their child who, just like him, had only one hand.

“The kids taught me about accountability,” said Abbott, who has become a public speaker since he retired from professional sports in 1999. “Accountability is all about making the best of what we’ve been given.”

On Saturday, as the final presenter at the 2019 AASA National Conference on Education, Abbott imparted his lessons and shared his experiences with superintendents. He gave them a fresh outlook on how they, like him, are facing challenges and how they must adapt.

Abbott holds a unique place in Major League Baseball history. He was the first — and so far, only — one-handed pitcher to reach the big leagues. He was never in the minor. He played on the U.S. Olympic baseball team in 1988 after playing in college at the University of Michigan and was drafted that year by the California (now Anaheim) Angels.

In 1992, he was traded to the New York Yankees, and in 1993, he threw a no-hitter against the Cleveland Indians. By the time he retired in 1999, he had played for four teams — the Angels, Chicago White Sox, Yankees and the Milwaukee Brewers. Abbott finished his MLB career with a record of 87 wins and 108 losses, and a 4.25 earned run average.

Abbott described his major milestones as changes made easier by significant mentors throughout his childhood in Flint, Mich.

His father constantly reminded him of the importance of humility and sportsmanship while training him to quickly swing his body and shift his hand to throw a pitch and prepare to catch if necessary. His second-grade teacher pondered the challenge of tying a shoe with one hand to the point that he taught Abbott how to knot his laces. A high school football coach who knew Abbott could throw recruited him for quarterback, guiding him through a slight modification of his stance and hands so that he could get the snap.

His teammates, managers and coaches in baseball helped him work through his frustrations and celebrated his victories. His family supported him as he transitioned from retirement into giving motivational speeches. He has shared much of it in his 2012 autobiography, Imperfect: An Improbable Life, co-written by Tim Brown.

His daughter once asked him during a visit to her elementary school class, “Do you like your little hand?”

He told the AASA audience that he paused and then said “I do. It’s taken me places that I wouldn’t have otherwise gone to.”

(Emily Gersema is associate director of communication with USC and a reporter on AASA’s Conference Daily Online.)