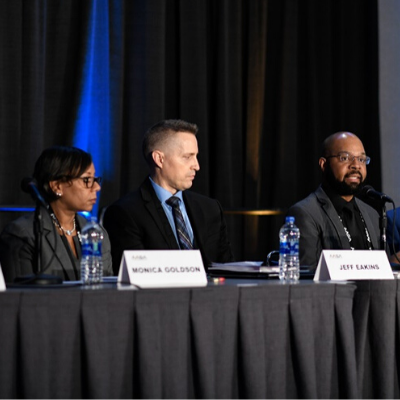 With the support of the foundation, six urban school districts were able to successfully launch the initiative during the 2011-12 school year to improve principal effectiveness and raise student achievement. Throughout the session, the speakers highlighted the program’s affordability and effectiveness, with Eakins, superintendent of Hillsborough County Public Schools in Florida, calling it “a game changer” for school districts nationally.

The basic idea involves creating a pipeline to strengthen those who will become principals to be better able to improve the quality of their schools. The programs can range from educating future principals to providing better support for those already serving as principals.

A core component of the initiative includes training supervisors so they can effectively support principals. This includes the creation of future leadership programs and academies, such as those about to take place this summer in the Prince George’s County, Md., district, according to Goldson, the district’s CEO.

Goldson discussed how the role of the assistant principal needs to focus more significantly on evaluation and coaching to provide the support for principals to thrive.

“What experiences are we giving our administration so that they can succeed, and how can we help them improve? Improvement is always a key factor,” Eakins stated.

With evaluation and ongoing support being key factors, the focus on principal supervisors and administration was raised throughout the one-hour session.

Another key component of the pipeline initiative is to encourage high-quality teachers to consider becoming school administrators.

“Giving teachers the opportunity to pursue something beyond the classroom, or providing them with leadership skills, invites them into the pipeline,” Goldson said.

She then clarified that the decision to pursue a leadership position is entirely up to the individual.

A graduate of a principal training program can possibly obtain years of experience before actually becoming a principal, contributing to their effectiveness once on the job.

The panelists pointed to the importance of supporting principals after they are hired. This support could include actively involving the community in decisions relating to the school.

The speakers emphasized the importance of unity within a school district community and how it can ultimately be a defining factor in the program’s success.

Attendees were encouraged to further research the Principal Pipeline initiative. They were given resource booklets that detailed the program.

The key to a successful principal pipeline was expressed by Anthony, an education consultant in Bowie, Md., when he stated, “All it takes is a conversation with the right people in the room, and maybe a cup of coffee.”