Menu
Eugene’s Balderas, a Migrant Laborer as a Youth, Named Nation’s Top Superintendent for 2020
Back 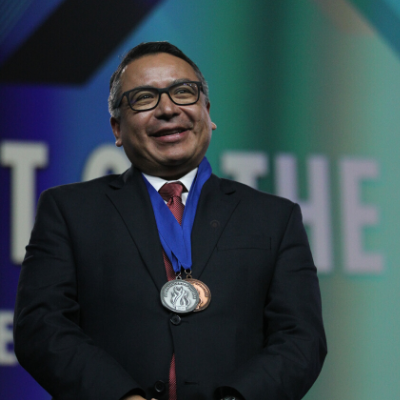 A 52-year-old educator who spent his formative years as a migrant laborer with his Mexican parents in the Pacific Northwest has been named the 2020 National Superintendent of the Year in an announcement Thursday at the AASA national conference in San Diego, Calif.

Gustavo G. Balderas, superintendent of the 17,500-student Eugene, Ore., School District, is the 33rd annual honoree in the program, co-sponsored by AIG Retirement Services, First Student and AASA. He accepted the award on stage at the conference’s 1st General Session.

[See Conference Daily Online’s full profile of Balderas plus a series of odds and ends about his distinctive characteristics.]

In accepting the award in front of an audience of more than 1,000 and a full cadre of state superintendent of the year award honorees, Balderas said he was humbled by the recognition, which he said deserved to be shared.

“This is a ‘we’ award, not a ‘me’ award,” he said, calling it “a collective effort” for his district to be cited in this manner.

Balderas told the assemblage that he was a proud product of public education, from kindergarten to graduate school, all in Oregon.

Balderas, a superintendent for nine years, has led the Eugene school system since 2015 after holding previous superintendent posts in Huntington Beach, Calif., and Madera, Calif. Most of his administrative and teaching career has been spent in Hillsboro, Ore., where he started in 1992 as a middle school teacher of non-English-speaking students.

He identified closely with those students owing to his own background. He began life as the child of migrant farm workers in eastern Oregon, where he also worked in the fields through his teenage years. He attributes his love of learning and passion for education to his own education in various public schools in Oregon.

Balderas completed his doctorate at University of Oregon in 2014. His dissertation study was titled “Subjective Versus Objective Student Discipline in a K-8 School District.” He earned his master’s in curriculum and instruction at Portland State University and a bachelor’s degree from Western Oregon University.

When Balderas was nominated for the Oregon Superintendent of the Year award, which advanced him to the national competition, a school staff member in Eugene wrote this in the application: “The graduation and success rate of our most marginalized students and schools has surged under his leadership, and even with all of this success and momentum, Dr. Balderas is always looking to make things better today and for the students of tomorrow.”