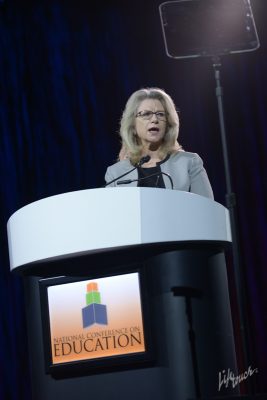 The next president of AASA, Gail Pletnick, called on her colleagues to raise their voices loudly to tell the stories that capture the distinctive ways public schools are working with students.

In a 15-minute address to the 3rd General Session at AASA’s national conference in New Orleans on Saturday morning, Pletnick said school system leaders must “showcase how public schools have redefined, redesigned and re-imagined teaching and learning environments.” She called those a modern-day version of the 3 R’s.

In a reference to likely Trump administration intentions to privatize K-12 education and introduce vouchers and for-profit charters as major initiatives, she added: “We must revalue not devalue public education in this country.”

Pletnick, who is the superintendent of Arizona’s Dysart Unified Schools in suburban Phoenix, will rise to the AASA presidency on July 1. She was elected to the post a year ago by the AASA Governing Board during its meeting in Phoenix.

She told several attendees at the final session of the 2017 national conference that it was now time “to tell the story of the 3 R’s in our schools. Our classrooms have been transforming-from the sit and get model of old, to the interactive approach of yesterday, to the student centered-future centered classrooms of today — with much work yet to be done to re-imagine classrooms of tomorrow.”

Pletnick shared a few examples, calling attention to distinctive programs in Vista, Calif., Piedmont, Ala., and her own district.

The Vista Unified School District, she said, has shifted to personalized learning to build on student strengths. Its high school recently received a Super School Award to expand its Personalized Learning Academy and to reimagine the typical American high school. She noted that AASA member Devin Vodicka leads the district.

In the Piedmont City Schools, educators have put in place a self-paced, personalized learning initiative in grades 4-10. Last year, Piedmont led the state in student growth. “Once again, one of our active AASA members leads this charge, Superintendent Matt Akin,” she said..

In Dysart Unified, staff have created an Innovation Academy that gives students ownership of their learning and control over pace and place for learning. “The classroom is redesigned, the expectations redefined and the system reimagined,” Pletnick said.

“These are the stories that must be told,” she added. “Investing in public education is investing in the future of our communities and this country.”