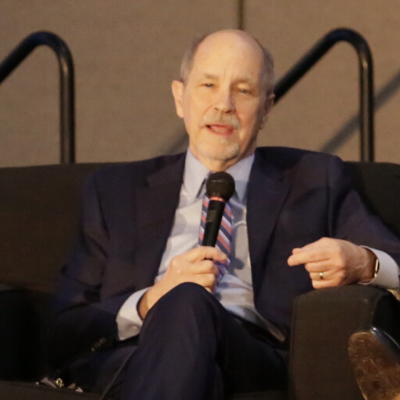 A presidential election year carries a lot of political uncertainty, but school board members and superintendents should take comfort from a recent national poll that shows a majority of likely voters support public schools, the leaders of the AASA and the National School Boards Association said on Friday.

An NSBA-commissioned poll released earlier this month showed that 64% of 1,000 likely voters surveyed think funding for public schools should be increased. In addition, 8 out of 10 of those supportive voters said they would, to boost funding support, back a tax increase.

Gentzel and AASA Executive DIrector Daniel Domenech spoke in-depth about current challenges facing school district leaders for what will be their last annual conference discussion at the AASA event. (They will reprise their tandem event at the NSBA conference in Chicago next month.)

Gentzel is retiring this year, capping eight years at the helm of the NSBA and a long career as a lobbyist and advocate for public education. Throughout his time with NSBA, Gentzel and Domenech have held a public discussion at the AASA’s annual meeting that addresses superintendents’ concerns and challenges working with school boards, as well as politics and other trending issues.

Although American voters’ support for education appears strong, a shortage of superintendents, administrators, teachers and support staff is worsening. With public education salaries lagging in many states, Domenech noted that school boards, when seeking a new superintendent, are reviewing a smaller and smaller pool of applicants.

Without an increase in state funds for salaries, school districts must turn to other mechanisms to boost their budget. Domenech noted that just 20% of the population has a child in school. That means school district leaders have to pitch bond issues and overrides to voters who may feel agnostic about support, or outright oppose a tax increase to help their local schools.

Gentzel advised that board members and school advocates should not ignore those taxpayers, and in fact, they should build reasonable logical arguments for supporting overrides and bonds, providing a clear picture of how the money will be spent and the potential benefits for the students and teachers.

Recalling a chatty, friendly barber named Merle from his days in the Northeast, Gentzel said that district leaders “have got to be like Merle” and engage every resident as a potential supporter for their schools.

“Too often we focus on people in our community who have titles,” Gentzel said.

Without any guidelines, things can get messy. Misunderstandings can bring decision-making to a standstill, which hurts the district.

(Emily Gersema is the assistant director of media relations at the University of Southern California.)