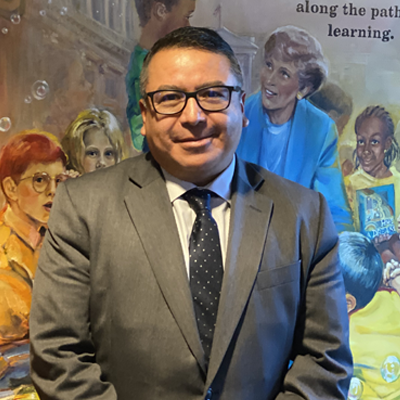 Gustavo Balderas, superintendent of Eugene Public School District 4J in western Oregon, is not about to get caught up in the “pobrecito syndrome.” That’s the term he uses to describe the “feel-sorry-for-him-or-her” syndrome. “Kids just want to learn, and you need to have high expectations for all kids,” Balderas says. “You need to love them to death, but we need to have a high bar.”

Balderas, 52, knows something about overcoming childhood challenges – and doing so without a free pass from his teachers. The son of migrant workers who traveled from Mexico to follow crop harvests up and down the West Coast is now at the top of his professional field, the 2020 honoree as National Superintendent of the Year. In his fifth year as superintendent in Eugene, Ore., and ninth year as a superintendent in three communities, he received the honor at AASA’s national conference on Feb. 13 in San Diego, Calif.

Balderas was born in the tiny town of Mount Vernon, Ore., where his parents were working the fields. It was a premature birth, and doctors advised his parents not to continue traveling back and forth to Mexico. They settled in the small town of Nyssa, Ore., on the Idaho border.

As a young child, he lived with his parents, a younger brother and a few extended family members in a migrant labor camp in Nyssa that had once served as a Japanese internment facility. The family shared a single room, using a hot plate for cooking, before eventually finding a small house of their own nearby.

They worked the fields in season and found other employment in a nearby sugar factory and the Ore-Ida frozen food factory just north of Nyssa. As a young teenager and into high school, Balderas joined the summer work crews, waking up at 4 a.m. to catch a truck that would take them to “clean the fields” until 2 p.m.

“We would weed the onion fields, weed the beet fields. It was back-breaking work,” he says. “I remember my mom saying in Spanish to me that that’s why you get an education, so you don’t have to do the work that we have to do.”

He entered school speaking only Spanish, and he spoke with a severe stutter. Through English as a second language classes and speech therapy, he learned English and began to cope with his stuttering.

With encouragement from family and mentors in school, Balderas began to excel. “I loved learning, I spent a lot of time at the library, just reading books, reading a lot of books,” Balderas says.

He went to a community college close to Nyssa, then discovered a scholarship offered at Western Oregon University for bilingual students who wanted to become teachers. “That’s how I got into teaching,” he says. “That was a route out.”

His first education job was as a middle school ESL teacher in the Hillsboro School District in northwestern Oregon. He spent 19 years in the district, rising through the ranks to assistant superintendent before moving on to the first of his three superintendencies.

The current superintendent in Hillsboro, Mike Scott, who worked with Balderas for many of those years, says Balderas had a major influence on the district with his strong advocacy for children – particularly those with personal challenges.

In Eugene, where he was hired in 2015, that commitment remains on display, according to school board chair Anne Marie Levis. “He is unbelievably laser-focused on kids and keeping them at the forefront of the work that we do,” she says.

One of Balderas’ signal achievements in creating greater equity for students in the 17,500-student Eugene district was establishing a standard schedule and calendar for all 31 schools. Previously, each school in Eugene had its own starting and ending times and school-day operating hours, creating stark differences in instructional time. Students attending neighboring schools could receive as much as seven months more or less total learning time during their K-12 schooling.

“He brought in a real systems approach to how we were going to educate our kids and what we would do to make sure that there was equity,” Levis says. “It’s really moved the needle in student achievement.”

Balderas faced pushback from some teachers, unions and community members,but was able to forge some consensus, she says, adding, “He kept listening and he kept talking about the data and what that meant for student achievement.”

Levis also credits the superintendent for working tirelessly to pass a $319 million bond measure in 2018 to rebuild three schools, renovate another and provide other improvements. It was the largest bond in the school district’s history.

For these and other accomplishments, he was named the 2020 Oregon Superintendent of the Year, becoming a nominee for the national award along with 49 other state honorees.

Balderas says his top current concern is providing more wraparound services to address the trauma that children from marginalized communities endure, conditions that can inhibit their learning in school. The district is debating how to allocate the $12 million per year it will receive from Oregon’s Student Success Act, passed last year by the legislature to reduce inequities and meet the needs of all students.

Balderas, a co-founder of the Oregon Association of Latino Administrators, which advocates for Latino educators and students, also is working to diversify the workforce in Eugene’s schools, where about half the students qualify for free lunch and nearly a third are students of color. Thirty-nine percent of the district’s principals are now people of color, but the superintendent remains concerned that just 15 percent of teachers are.

“The goal is to try to keep the local talent here and get them to become teachers, because we’re more likely to retain them,” he says. “I know firsthand the importance of students having teachers and staff members who look like them.”