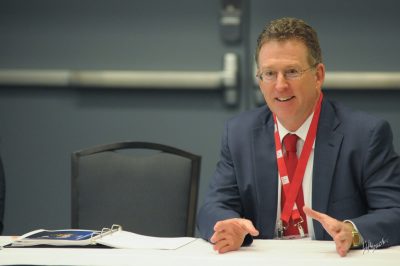 A panel of attorneys discussed, at an AASA conference session Friday, how the U.S. Department of Education’s Office for Civil Rights is struggling to keep up with investigations involving public schools because of staff reductions under the Trump administration since January 2017.

Serious backlogs in investigations are the result, according to John Borkowski, a partner of Husch Blackwell, a law firm with headquarters in Kansas City, Mo. He explained that the new administration has reduced the size of the federal government, and the number of Department of Education employees has shrunk by 8 percent over the past two years.

OCR employees can barely keep up with the rising amount of complaints received, according to Borkowski.

Two colleagues, Aleks Rushing and Demetrius Peterson, both attorneys at Husch Blackwell, expanded on the changes at the education department.

“The total amount of complaints that have been received are over 76,000,” Rushing said. “I think, during this administration, people anticipated that would go down, given the #MeToo movement and a lot of other issues on social media, but we anticipate complaints will continue to go up.”

Discussion then switched to other topics including updates on recent federal policy guidance materials, analyses of OCR’s enforcement priorities and steps school administrators can take to prepare their districts in the event of any OCR-related investigations or complaints.

One of the first policies the administration withdrew upon taking office was the Dear Colleague letter written during the Obama administration stating that OCR viewed transgender status and sex-segregated facilities as something school districts should accommodate. That meant individuals who are not accommodated could file a complaint and OCR would have to investigate.

The Trump administration has also set out to enforce guidelines for handling Title IX issues, sexual violence and discrimination.

The Kansas City OCR office now has less than 20 employees who cover every complaint that comes out of Kansas, Mississippi, Oklahoma and South Dakota. “You’re going to see the (OCR) offices shrinking in size,” Peterson said.

Policies enacted by the Trump administration are blocking complaints from being issued on numerous topics, and low staffing will continue to cause these investigations to take several years to finalize, but Peterson expressed school leaders to not to get discouraged.

“They still have a mandate to ensure that the students’ rights are upheld and that they are not being trampled on,” Peterson said. “And unless there are changes in Washington, these laws still need to be enforced.”

(Steve Barnum, a senior at Middle Tennessee State University, is an intern with Conference Daily Online.)