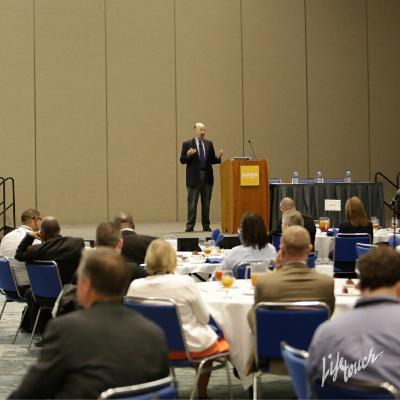 Political enthusiasm is nearly at an all-time high heading into the 2020 election – but Americans are increasingly divided on many issues, including the state of K-12 public education.

In a rare bright spot, new research reports more adults are satisfied than dissatisfied with the state of K-12 education, the first time Americans have said so since 2004.

“It’s only a slight difference. We need a few more years of data to see if this is just a one-year blip,” Meadow explained. “Of course, every school district is different. The picture we get nationally might not reflect what you see in your community.”

Meadow also examined how local bias is present in Americans’ view of education. For example, nearly all adults gave higher grades to their local schools than to schools nationwide as a whole.

Curriculum and funding, unions and labor negotiations, vouchers and charter schools, and more – Americans’ views on nearly all facets of education policy were covered by Meadow’s presentation of recent polling.

Many findings were not surprising; according to a 2019 PDK and Langer Research Study, a majority of adults believe the president and both parties in Congress are not paying enough attention to the state of public education.

Similarly, adults across the demographic and political spectrums agreed that schools don’t receive enough funding. Only adults who identified as Republican were more likely to say that schools currently have enough or too much funding.

“Polarization is extremely deep,” said Meadow. “But the intensity is there on both sides.”

Echoing this, recent Ipsos / Reuters polling also found that a political candidate’s position on school funding was much more important to Democrats (53%) than to Republicans (only 30%).

Similar differences among party lines were found when looking at the topic of charter schools.

Meadow said a clear majority of Americans support charter school accountability, but not to the same degree. More than two-thirds of Democrats strongly agree that charter schools should be required to follow the same rules and regulations as public schools, while only 43% of Republicans said the same.

The charter school issue also drew a distinct line between parents, who were found to mostly support charters, and educators, who were more generally opposed. Meadow said this disparity signals a potential long-term conflict for districts across the country.

“Whenever there is a gap between what teachers want and what parents want, it's guaranteed that it won't be solved quickly,” he said.

One thing educators and parents were in close agreement on was the right of teachers to go on strike – although for different reasons.

While opinions are plenty, education is not at the forefront of voters’ minds this election cycle, according to Meadow.

When ranking the issues most important to them for 2020, voters cited health care, immigration, the economy and dysfunction in government all ahead of education.

Despite being overshadowed on a national scale, education may be a hot topic at the local level, especially in states where voters will be asked to weigh the cost of new funding initiatives. California, Idaho, Missouri, North Carolina and Washington all are set to have ballot measures on education funding in 2020.

Some measures are more politically charged than others, specifically those aiming to implement new taxes. But for school districts looking to boost funding through local bond measures or other community initiatives, Meadow says the data makes it clear: Specificity is key.

“When the funds will be going to specific projects or funding a specific library, funding these specific programs, there is much broader support.”

For over 30 years, Meadow has been one of the top Democratic pollsters and strategists in the country. He has worked for members of Congress, statewide officials, state legislators, mayors and city council members and is one of the nation’s foremost experts on ballot measure and initiative campaigns.